This was sent to me by a dear

The time to progression was a median of 17.9 months among women taking pazopanib versus 12.3 months for those in the placebo arm (HR 0.77; 95% CI 0.64-0.91, P=0.0021), according to Andreas du Bois, MD, a professor of gynecologic oncology at Kliniken Essen Mitte in Essen, Germany, and colleagues

“Our findings show that we finally have a drug that can maintain control over ovarian cancer growth achieved through initial treatments,” du Bois said here at the American Society of Clinical Oncology meeting.

While the difference in disease-free survival times may not seem like much, advanced ovarian cancer has a cure rate of only 20% to 25%, the investigators noted. “While nearly three-fourths patients respond to initial treatment with surgery and chemotherapy, about 70% of patients relapse, half in the first year,” they said.

The most developed line of therapy for recurrent ovarian cancer is the anti-angiogenic mechanism of action drugs, according to a recent Clinical Context Report in MedPage Today. “Of those, there are several options: sorafenib and sunitinib are both vascular endothelial growth factor receptors and PDGFR inhibitors. And then, in addition to that, there’s a combination of drugs that inhibit VEGF-R, PDGFR and FGFR, and that includes cediranib, pazopanib and BIBF 1120,” said Alpa Nick, MD, of the University of Texas, MD Anderson Cancer Center.

In the study, 940 patients with stage III/IV ovarian, fallopian tube, and primary peritoneal cancer were randomly assigned in a 1:1 ratio to receive 800 mg pazopanib or placebo daily for 24 months.

All patients had undergone prior surgery and five or more cycles of platinum-taxane chemotherapy and showed no signs of progression, although 58% had residual disease.

As for overall survival, the first interim analysis showed no difference between the two arms, “and there continues to be no trend in either direction,” he said.

Still, maintenance therapy remains controversial because it exposes patients to drugs — and the costs and side effects that can accompany them — when they have no apparent symptoms. Also unknown is whether patients would live just as long if they waited and only took the drug when they relapsed.

An advantage of pazopanib is that it is an oral drug, while bevacizumab is an injectable, said Joanne Mortimer, MD, of City of Hope in Duarte, Calif.”Here we have an oral drug that can prolong time [in remission,] clearly improving quality of life,” she said.

A goal for future research is to combine pazopanib with other targeted drugs and personalize therapy according to patient and tumor characteristics, du Bois said.

Pazopanib is already approved by the FDA for the treatment of renal cancer and soft-tissue sarcoma.Manufacturers GlaxoSmithKline said it will be filing an approval application for the new indication of maintenance therapy on the basis of this trial. 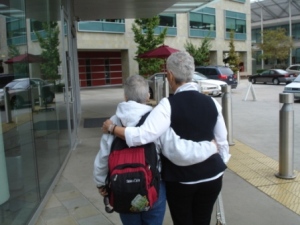